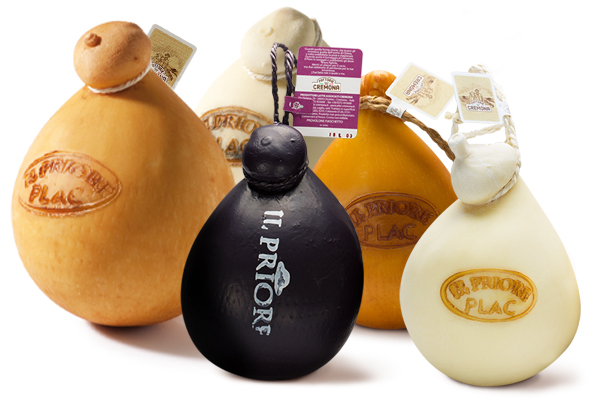 HISTORY OF A CHEESE. The story tells that a Prior, returning from Spain, stayed for a few months in the Monastery of Cremona. A great gourmand, underlined by his size, the Prior one evening tasted a cheese produced on site that he liked. He asked whose work he was. The friars pointed out the cheesemaker who supplied them and the next morning he showed up at the farm. “Good man” – he said – “your cheese is very good, but with my advice it will be much better”. Amazed and frightened, the farmer nodded. He had never done it! For days and days the Prior tormented the poor man with advice, which  sounded like sermons to the cheesemaker. “Here we are” – the Prior finally said one day – “now you know how to make the cheese I deserve; I’ll wait for you in twenty days at the monastery with your work ”. When the cheesemaker had the pasta filata in his hand, the Prior came to his mind and he thought “I’d like to strangle that boring man” and he twisted the top with strongly. He looked at that strange shape, which actually reminded him of the head of the church man, and satisfied he let the cheese ageing. When he brought the cheese to the Monastery, the Priore tasted it and satisfied he said: “very well son. You deserve praise for the cheese, but two weeks of penitence for your irreverence: You did it just like me.”

Fattorie Cremona Provolone is representative of the Italian dairy tradition. Expert cheesemakers prepare it exclusively with whole milk collected from the members of the cooperative. It stands out for its slightly flaky and soft pastry, and for its typical aroma. 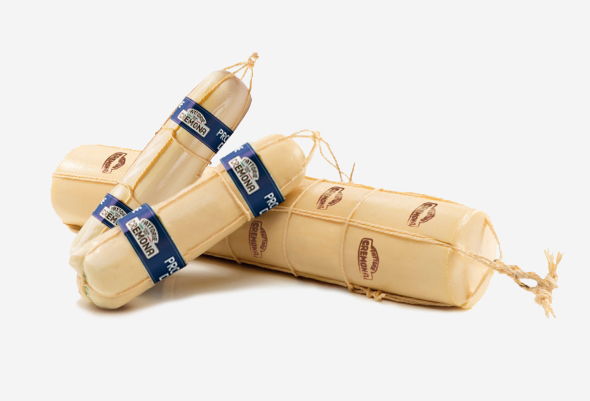 Fattorie Cremona mild provolone is distinguished by its compact and soft structure, which stands out for its light and delicate flavor. The typical sharpness and the slightly flaky texture. Our sharp Provolone is available in various formats, from the classic pancetta to 25 kg mandarino shape. Discover all the formats of our Mild Provolone. From half cylinder to “Rueda”. Discover all the formats of our Sharp Provolone. From the triangle to the half-moon shape. Sigillo Rosso 1933 is the name assigned the best Provolone of Fattorie Cremona, an exclusive collection that has been renewed and improved year after year, for more than eighty-eight years. A very high quality product that represents the synthesis of values, knowledge, tradition and cooperative spirit.